Gemstone lovers rejoiced in the summer of 2016 when two leading jewelry-industry associations recognized spinel as an official birthstone for August. Best known for its vivid red color — but also available in brilliant shades of pink, purple, green and blue — spinel has been called “the great imposter” because of the prevalence of “regal rubies” that were later reclassified as spinel. 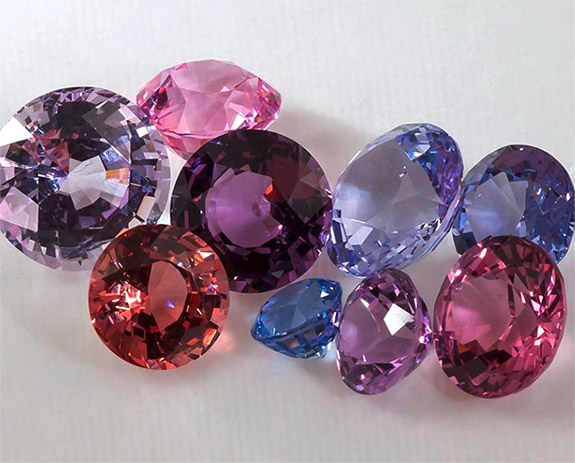 The joint announcement by the American Gem Trade Association (AGTA) and Jewelers of America (JA) that spinel was joining yellow-green peridot as an August birthstone was momentous because it was only the third time the modern birthstone list was amended.

“At certain moments in history, when there is a strong call from gem enthusiasts to expand the list of official birthstones, Jewelers of America believes in recognizing the importance of historically significant gemstones and giving gemstone lovers a choice that suits their preferences,” JA President and CEO David Bonaparte said at the time.

Originally created in 1912 by the American National Retail Jewelers Association (now known as Jewelers of America), the official list was expanded in 1952 to accommodate alexandrite, citrine, tourmaline and zircon, and again in 2002 when tanzanite was welcomed as an alternate birthstone for December.

Deep red spinels that were famously mistaken for rubies include the 170-carat “Black Prince Ruby,” which is set in the Imperial State Crown in the British Crown Jewels, the 398-carat ruby-colored gem that tops the Imperial Crown of Russia and the 361-carat Timur Ruby, which was presented by the East India Company to Queen Victoria in 1851.

The cases of mistaken identity persisted until gemologists and mineralogists finally developed the technical ability to distinguish spinel from ruby. Ruby is aluminum oxide, while spinel is magnesium aluminum oxide. The latter is formed when impure limestone is altered by heat and pressure. Both spinel and ruby get their reddish color from impurities of chromium.

Spinel is durable, rating from 7.5 to 8 on the Mohs hardness scale. Ruby and sapphire, by comparison, score a 9, while diamond tops the hardness list with a 10.

The gems in the photo, above, are part of a suite consisting of 32 round brilliant-cut spinels that range in weight from 0.60 carats to 4.60 carats. They were sourced in Vietnam and became part of the Smithsonian’s National Gem Collection in 2013.